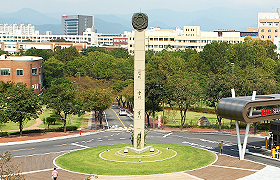 Kyungpook National University Contributes 53.81 Million Won to Korean National Red Cross for COVID19
March 20, 2020: Kyungpook National University transferred a donation of 53.81 million won to the Korean National Red Cross for COVID19 relief.  The donation was organized by the KNU Professors Association and collected from March 3 to March 13 from professors, employees, students and institutions.  A total of 316 individual donations were collected.
“As COVID19 spread rapidly in Daegu and North Gyeongsang Province, we are currently short of supplies for patients, medical staff, and quarantine personnel,” said Mr. Park, chairman of KNU’s Professors Association who was in charge of the fundraising.  “As a Hub National University, we have come to raise money to share some of the difficulties in our region.”
Kim Soo Hyun, Head Student Reporter at KNU, who also donated, expressed his “deepest respect to the medical staff who are struggling for the patients” and said he has donated because he wants to “support them and even add a little strength.”
During the peak of the outbreak, KNU also donated usage of one of its dorms to the City of Daegu, to be used as a Living Care Center.  The dorm was returned to KNU on March 28.
List