Based on four old educational guidelines,‘Cooperation, Service, Wise Ruling, and Pride’, KNU createda new motto when it started as a comprehensive university in the 1960s.

The highest virtue that a university should pursue as a seat of learning, it refers to the endless efforts KNU has made towards seeking and advancing knowledge.

KNU takes pride in nurturing leaders who will contribute to Korean and international society, while taking pride in its history, traditions, and vision for the future. 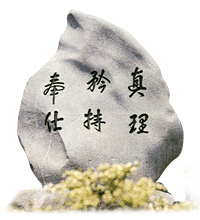 The symbol on the KNU flag was selected through a contest when the university was established and was later modernized to its current design. The Cheomsungdae, an observatory from theShilla dynasty, stands in the center surrounded by six stars representing the five colleges and one graduate school that started the university in the beginning. The circular margin represents the well-integrated personality, pride, and harmony of KNU. 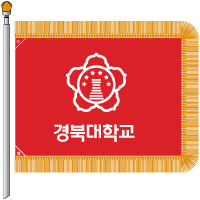 The university anthem was first sungat the 6th anniversary of theUniversity’s establishment. The lyrics were written by then President Byung-ganKo,telling the historic background, cultural traditions, and spirit of ‘Hwarang’, a group of elite youth who held great influence during the time of the Shilla Kingdom. The music was composed by ProfessorJemyung Hyun, Dean of the College of Music at Seoul National University who was originally from Daegu.

KNU’s official flower is the Persimmon flower which is very common in the Gyeongbuk region.

History
The Hobanu is a human-friendly animal with a long history. It was found painted on a grave from theGoguryeoera(1,600 years ago). This is emblematic ofthe long history of KNU.

Service
The Hobanu is a close friend who has been with the history of agriculture, it is associated with the service of University Motto and that is as an animal that is a symbol of tenacity, integrity, and service.

Symbolization
The Hobanu is a Korean traditional animal of simplicity and strength. It possesses lion-like bravery, does not yield, and is confident. Its enterprising andtirelessly fighting spirit well representsthe philosophy and educational goals of KNU