Nip it in the Bud: New, Simple Diagnostic Tool for Effective Detection of Colorectal Cancer

Nip it in the Bud: New, Simple Diagnostic Tool for Effective Detection of Colorectal Cancer 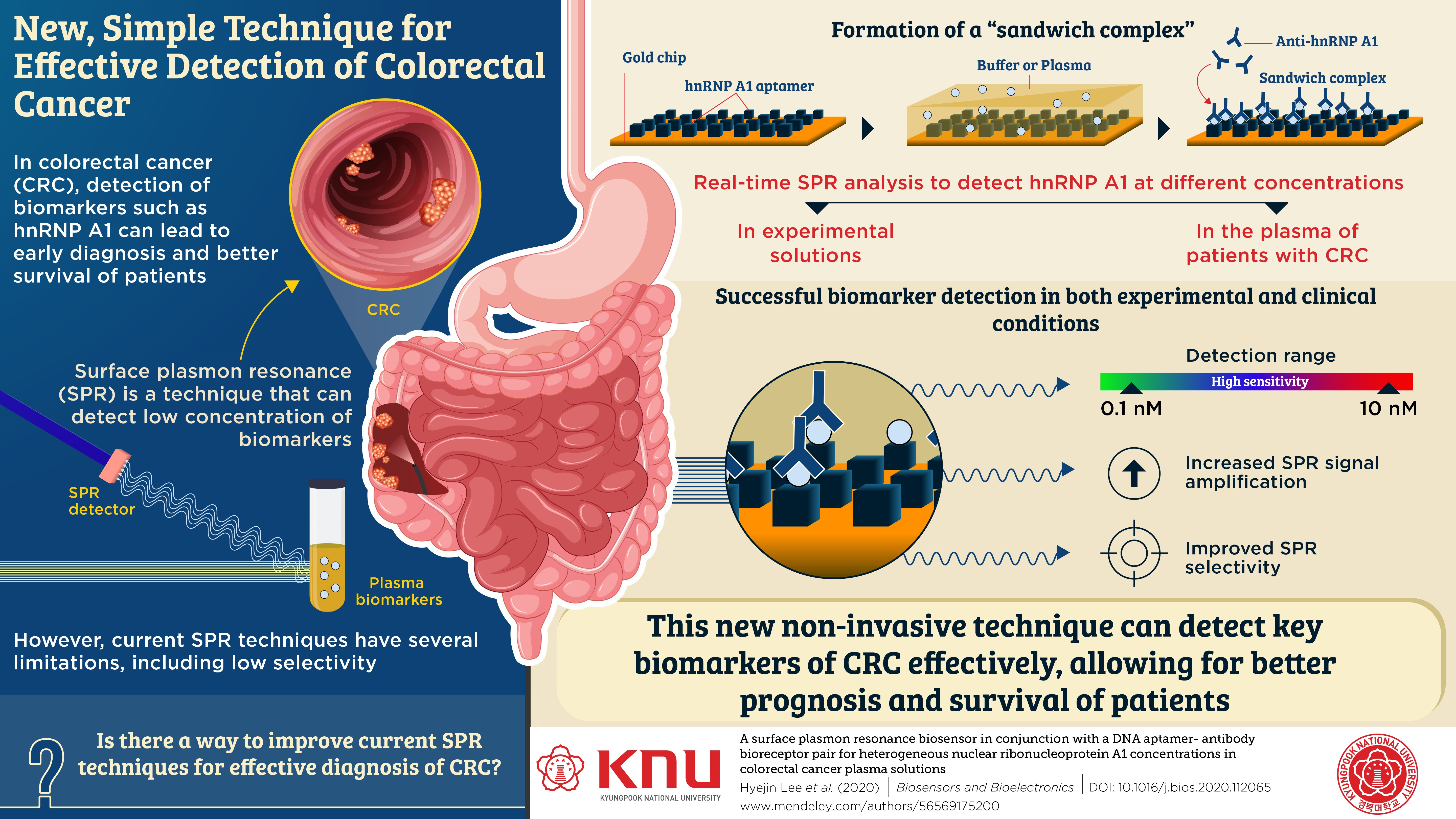 Despite being treatable at its early stages, colorectal cancer (CRC) is one of the deadliest types of cancer. This is because symptoms of CRC often go unnoticed until the disease reaches an advanced stage, making it difficult for the treatment to be effective. Thus, early diagnosis and screening of at-risk patients can significantly improve survival rates. Researchers have worked to improve current screening tests, which tend to be expensive, invasive, and painful. One solution is the detection of different proteins that serve as “biomarkers,” whose presence in the blood of patients indicates specific types of cancer, allowing the diagnosis to occur via a simple blood test.

In patients with CRC, several of these biomarkers have been identified. One of these, called heterogeneous nuclear ribonucleoprotein A1 (hnRNP A1), is found in high concentrations in the blood plasma of patients with CRC and is particularly promising as a biomarker. To this end, in a new study published in Biosensors and Bioelectronics, a team of scientists at Kyungpook National University, led by Professor Hye Jin Lee, set out to develop a simple diagnostic tool based on the detection of hnRNP A1. Prof. Lee explains, “Most patients with CRC do not notice any symptoms until it reaches stage 3 or 4. Thus, developing an easy and cost-effective method for the diagnosis of CRC was our main focus.”

The scientists focused on a “label-free” diagnostic technique, called “surface plasmon resonance” (SPR), in which biomarkers are detected by measuring their adsorption on a surface. The basis for choosing this method was that SPR is an extremely sensitive technique and can be used to detect very low concentrations of biomarkers. But, current SPR methods have several limitations, including non-specific adsorption of molecules, which makes the results difficult to interpret, also giving rise to false positives. In this new study, the scientists resolved this problem by adding a pair of “bioreceptors” for the target protein, where one bioreceptor interacts with the biomarker while the other is attached to a gold surface binding to the biomarker for an accurate reading of the corresponding adsorption spectrum. They used a short strand of DNA, called “DNA aptamer,” and an antibody to bind to the hnRNP A1 protein, forming a “sandwich complex” that could be easily detected on the sensing platform. Prof. Lee explains, “To improve the SPR selectivity for hnRNP A1, we used a DNA aptamer and antibody specific to hnRNP A1 to form a DNA aptamer/hnRNP A1/anti-hnRNP A1 sandwich complex.”

The scientists then wanted to test the effectiveness of this method for CRC diagnosis. For this, they prepared several assays with varying biomarker concentrations and then performed an SPR detection analysis. They performed a direct analysis on the blood plasma from patients with CRC, to determine whether their “sandwich complex formation” method could successfully detect the hnRNP A1 protein in cancer patients. The experiment was a success on all fronts. Not only did the SPR assays show high sensitivity and selectivity for a wide range of hnRNP A1 concentrations, but the method also showed better results than existing diagnostic kits!

While the scientists caution that more work is needed to develop readily available diagnostic kits based on their method, they are confident that these findings can pave the way to a new era of cancer diagnostics and treatment. Prof. Lee concludes, “We hope that our new diagnostic method can eventually be used ubiquitously, offering real-time monitoring and effective diagnosis, in addition to being used in disease prevention, prognosis management, and point-of-care systems.”

* Title of original paper:  A surface plasmon resonance biosensor in conjunction with a DNA

Dr. Hye Jin Lee received her PhD in 1999 from the Ecole Polytechnique Federale de Lausanne, Switzerland, under the guidance of Prof. H. H. Girault. Following postdoctoral research at the University of Wisconsin-Madison, she undertook an Associate Researcher position at the University of California-Irvine. She then joined Kyungpook National University as an Assistant Professor in 2008 and was promoted to Full Professor in 2017. Professor Lee's research covers a broad range of topics in analytical and electrochemistry, nanomaterials, and biotechnology. Her primary research focus is the design and application of highly sensitive and selective biological sensors integrating emerging nanotechnologies.