KNU Department of Environmental Engineering Research Team led by Professor Woong Kim collaborated in joint research with global universities such as King Saud University and successfully developed a photocatalyst for the photodegration of dye-containing wastewater with a degradation efficiency of more than 98% within 1 hour.

Every year, approximately 1 million tons of dye is produced, resulting also in the production of a vast amount of dye-containing wastewater. As a result, there have been many techniques such as adsorption, chemical oxidation, ozonation, coagulation, membrane process, biological degradation, electrochemical process, and photocatalytic degradation to eliminate dye contamination from water and wastewater. Of the existing techniques, photocatalysis has been considered to be the greenest approach as well as one of the most broadly utilized due to its high degradation ability, wide applicability, and recyclability of the photocatalyst. However, the most commonly used photocatalysts to eliminate organic pollutants for this technique, such as zinc oxide (ZnO) and titanium dioxide (TiO2), hardly absorb visible light irradiation because of free surface defects, preventing a higher photocatalytic efficiency.

To address this challenge, Professor Woong Kim’s research team modified molybdenum disulfide (MoS2) with the metal-organic framework (MOF) via solvo-thermal technique to produce an iron (Fe)-based MOF hybrid photocatalyst, or MoS2@MIL-88(Fe). MoS2 is an alternative for TiO2 and ZnO that has received remarkable attention because of its superior multi-functional properties and ability to absorb visible light sources. Nevertheless, it was anchored onto MOF carriers to improve the photocatalytic performance of dye degradation, as MoS2 could not be used alone for photodegradation due to its fast rate of recombination of electron-hole pairs and low operation of the visible light region.

The team found that upon light illumination, MoS2 of the created hybrid photocatalyst generates •OH radicals, which perform as prevailing oxidizing agents for the degradation of dye molecules such as Methylene Blue (MB) and Rhodamine (RhB). Additionally, variety of radicals such as •OH, −•O2−, e− and h+ are also generated, separating excitons created in MIL-88(Fe) more efficiently and thereby increasing the MB and RhB degradation rate. The optimal profile to produce a degradation efficiency of 98.5% and 97.4% within 60 min for MB and RhB respectively was as follows: initial concentration of 50 mg/L for each dye, catalyst dosage of 0.05 mg/L, and initial pH of 5.

On the research, Professor Woong Kim states, “Through the discovery of this photocatalyst, the degradation process for organic dyes has been reduced by 1/3. To have developed an innovative yet eco-friendly way to enhance the efficiency for degrading dye-containing wastewater is encouraging. We have high hopes that this photocatalyst can be used not only for the degradation of organic dyes, but also for that of many other organic pollutants as well.”

The research was published on July 15 in the internationally recognized journal, Journal of Hazardous Materials. The research was carried out by BK21 FOUR Center for Smart Circular Infrastructure and was supported by the Energy Technology Development Project of the Ministry of Trade, Industry and Energy. 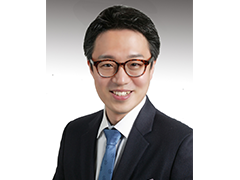