Shooting high definition 2D as well as 3D movies with the same lens is now possible, according to new study by Korean scientists

Light-field imaging is an emerging technology by which pictures with 3D features are obtained. However, the low resolution of existing light-field imaging technologies limits application in commercial portable or compact imaging systems, such as mobile phone cameras or endoscopic 3D imaging. Now, scientists from Korea have developed a new lens system that can switch between high-resolution 2D imaging and 3D light-field modes quickly and consistently, allowing for extraction of both 2D and 3D high definition moving pictures from a single take. 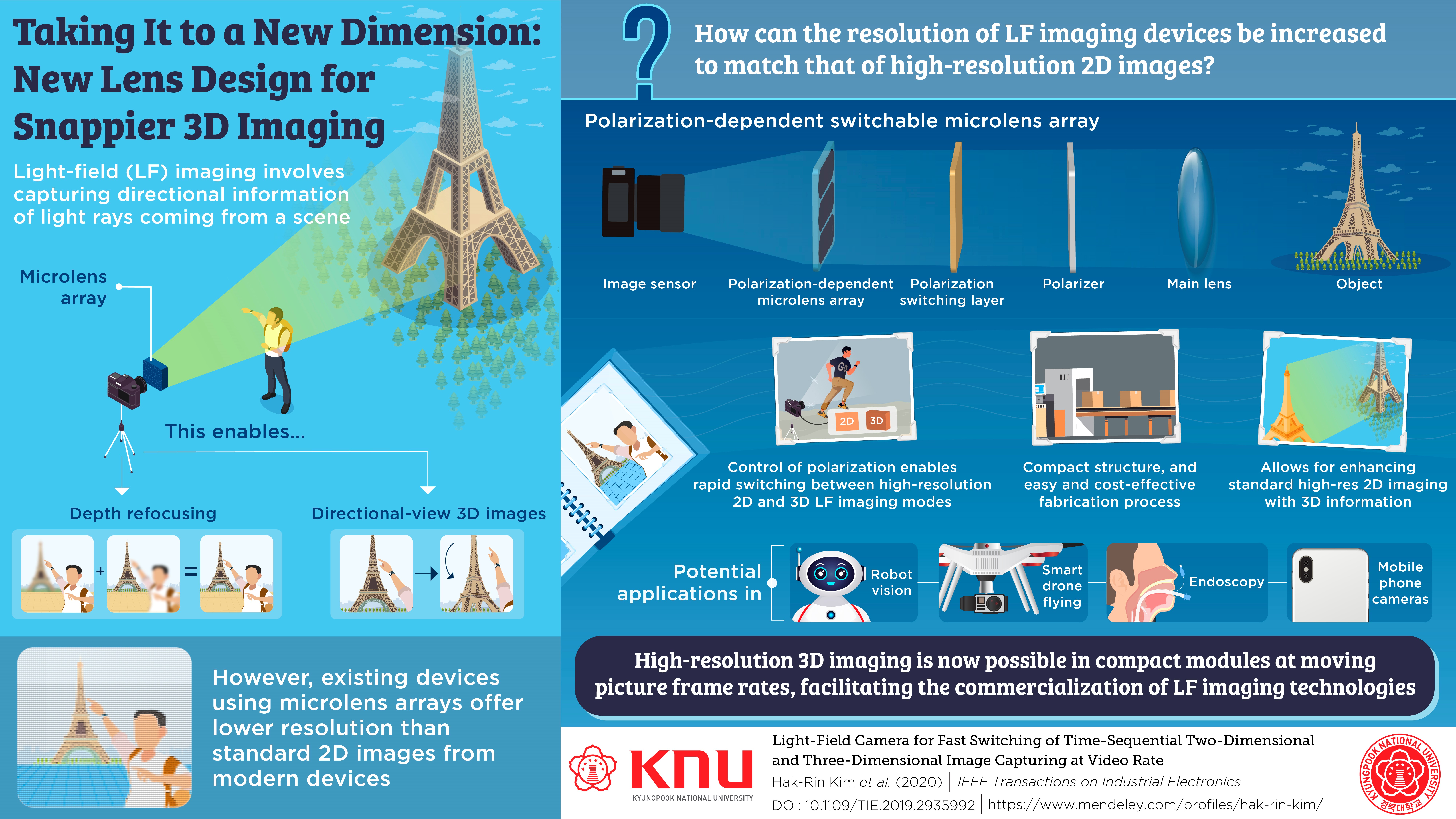 This has probably happened to you a few times: You take a picture and an otherwise beautiful portion of the scene is out of focus. If you try to focus on that zone in the next shot, another part of the picture becomes out of focus. This is a limitation of conventional digital photography. The use of a fixed lens for each shot implies constant focal length and depth of field, meaning that only objects within a certain distance range are in focus in any given photo. While modern cellphone cameras can shoot many pictures at different focal lengths in quick succession and stack them to produce an “all-in-focus” composite image, this process is too slow for shooting videos or capturing objects moving rapidly.

There is, however, an alternative technology that can solve some of these problems. Light-field imaging is a modern technique for capturing 3D information from the scene being imaged. This is typically done using a microlens array, a matrix of smaller lenses placed right in front of the image sensor. Each tiny lens captures the same scene from a unique direction and projects its view onto the image sensor. This “plurality” of information is then digitally compiled to create an image with 3D features. Pictures generated this way can not only be re-focused after shooting (similar to the ‘all-in-focus’ 2D images), but also rotated as if they had been taken from slightly different directions.

Although light-field imaging is certainly attractive, one of its main problems is that the resolution of the final image is much lower than that of conventional 2D pictures taken with modern cameras, which limits its commercial applications. To overcome this limitation, Professor Hak-Rin Kim and his team from Kyungpook National University, Korea, recently developed a unique lens system that can breathe new life into this promising 3D imaging technique. Their study is published in IEEE Transactions on Industrial Electronics.

The proposed system comprises a polarization-dependent microlens array, which is an array that is either active or inactive (transparent) depending on the polarization of the incident light. Meanwhile, the polarization of light—a property related to the orientation of light waves as they travel through space—can be rapidly controlled through switchable polarizers. In this way, the lens system can switch between 2D and 3D imaging modes in less than 300 microseconds.

The purpose of being able to rapidly switch between imaging modes is to allow users to seamlessly take 2D and 3D shots of the same scene, at rates fast enough for the extraction of high definition static and moving pictures of moving objects. As Prof Kim explains, “To overcome the barriers to the commercialization of light-field imaging, we have to provide its additional functionalities without sacrificing the 2D high-resolution capabilities expected of modern cameras. Our switchable microlens array can provide both functional light-field images and high-resolution 2D images at framerates appropriate for capturing moving objects.”

What’s more, this developed lens system is compact and can be fabricated through a reliable and cost-effective process. Prof Kim envisions a wide variety of applications where their system would be impactful: “Our light-field imaging scheme, compatible with video framerates, could be implemented in bioimaging microscopes, miniature endoscope systems, and mobile camera modules. Most notably, robot vision systems and smart drones, which require real-time 3D information about their environment for self-control, may really benefit from our fast-switching microlens array.”

This work, which brings a new perspective to light-field imaging, could mark the first step towards widespread adoption of this technique in digital photography and high-resolution imaging.

In 2005, Hak-Rin Kim received a PhD in Electrical Engineering from Seoul National University, Seoul, South Korea. He is currently a Professor at the School of Electronics Engineering of Kyungpook National University, Daegu, South Korea, which he joined as a faculty member in 2007. The research interests of his group in the Display/Organic Electronics Laboratory are liquid crystal displays, organic-based electro-optic devices, optics for 3D imaging and 3D displays, and novel fabrication processes for flexible printed electronics.