Sepsis is a deadly condition that—because of a lack of effective treatment strategies—affects millions of people worldwide. In a new study, scientists from Korea analyzed the effects of a compound derived from olives, called maslinic acid, on human cells and mice that were affected by sepsis. Their findings shed light on the potential applications of this molecule as a drug against sepsis treatment, owing to its anti-inflammatory properties. 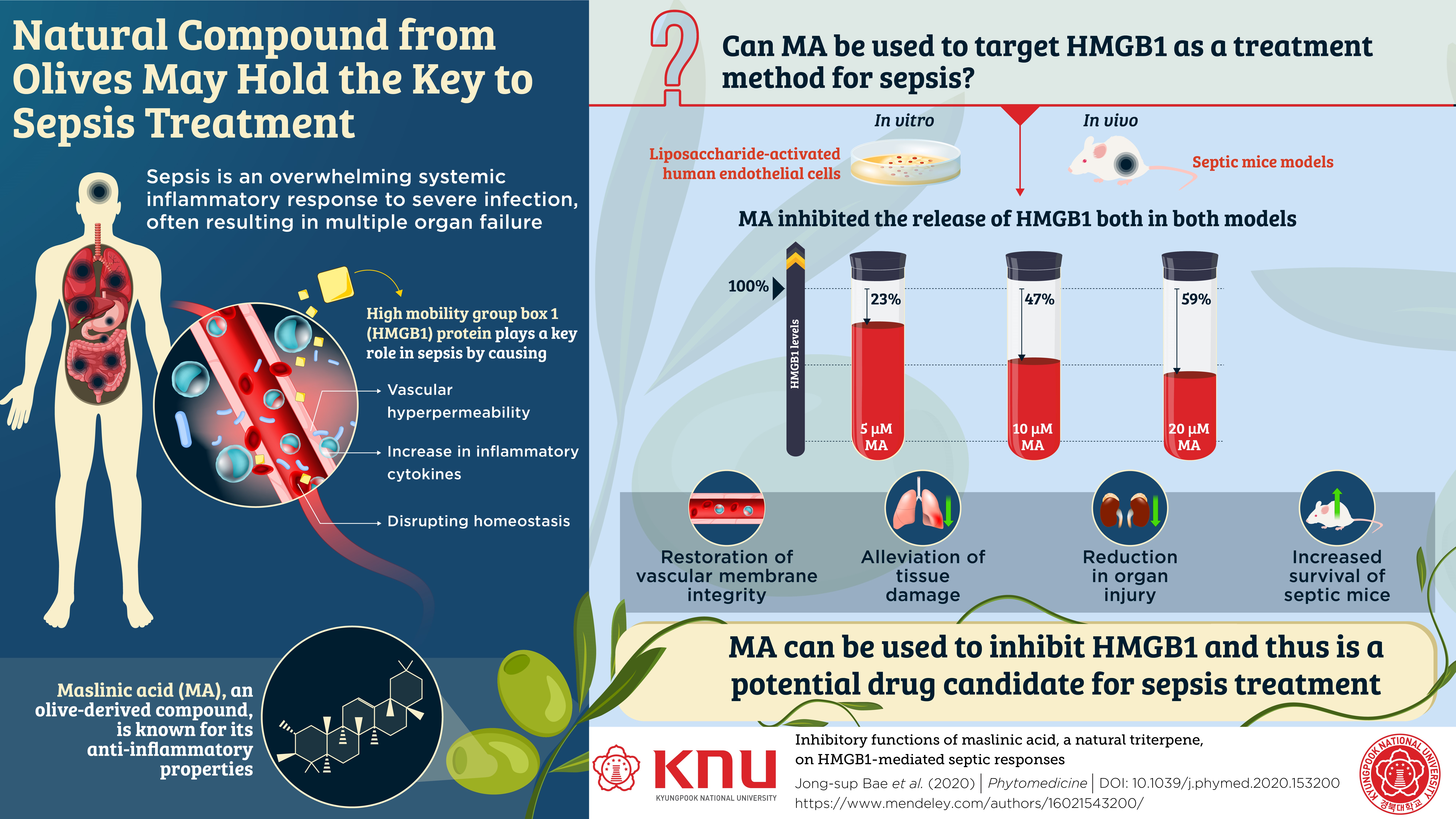 When the human body is confronted by a foreign object, such as a pathogen, the immune system detects the intruder and promptly reacts to neutralize the threat. The immune response to harmful stimuli, such as infections, is normally characterized by an increase in inflammation. But, this response can sometimes be so severe that it can lead to collateral damage to healthy cells and tissues—a condition known as sepsis. Sepsis is a severe, life-threatening reaction that—if left unchecked—can cause multiple organ failure and death. Yet, there is a lack of effective therapies for this condition, with current treatments focusing solely on managing symptoms. Given the importance of this public health issue, finding effective treatment strategies against sepsis is essential.

In a new study published in Phytomedicine, scientists at Kyungpook National University, South Korea, led by Professor Jong-Sup Bae, set off to find novel strategies for sepsis treatment. They focused on a molecule called “high mobility group box 1” (HMGB1), a protein secreted by immune cells in the presence of toxins and foreign stimuli. This molecule is known to be an important mediator of sepsis, affecting the integrity of blood vessels (a condition known as “hyperpermeability”) and disrupting the delicate balance of fluids and proteins. Thus, the inhibition of this molecule could possibly alleviate inflammation and associated tissue damage, reducing the effects of sepsis.

To this end, the scientists first identified a compound derived from olives, called maslinic acid (MA). MA is known to have a variety of beneficial health properties, but the scientists were curious to check its effects on HMGB1 owing to its anti-inflammatory properties. Prof Bae says, “Over the past few decades, our team has been working to look for novel small molecules or proteins that could be used as drugs for the treatment of sepsis, which is a life-threatening condition.”

To begin with, the scientists tested the compound on human endothelial cells in which an immune response was triggered using a bacterial endotoxin called “lipopolysaccharide” (LPS) to make the cells release HMGB1. Then, they performed “in vitro” assays to check the effects of MA on these cells. They also performed “in vivo” experiments in mice with sepsis, looking at the effects of MA on HMGB1-mediated cellular damage. Their findings showed that MA decreased the release of HMGB1 in both LPS-activated human cells and mice with sepsis. In fact, when the scientists dug deeper, they found that MA resulted in a reduction in various inflammatory factors and increased blood vessel integrity by inducing a “barrier protective effect” in these two models. This confirmed that MA can alleviate the inflammatory effects of HMGB1 and restore barrier integrity, making it a suitable candidate drug against sepsis.

In the light of the ongoing COVID-19 pandemic and the role of sepsis in infection-related deaths, finding suitable treatments for this deadly condition is critical. Although the findings of this study require further testing in humans, the scientists are optimistic about the applications of MA as a potential treatment option for sepsis. Prof Bae concludes, “Secondary infections in the lungs often lead to septicemia and, in the worst cases, death. Based on our findings, further experiments and clinical trials can lead to the development of a novel treatment for sepsis.”

3 Department of Pathology and Regenerative Medicine, School of Dentistry,

Dr Jong-Sup Bae is a Professor in the Department of Pharmacy, College of Pharmacy at Kyungpook National University, South Korea. He graduated from the Kyungpook National University in 2000 with a Bachelor of Science in Biology and a Master’s degree in Biochemistry in 2002. He then received his PhD from St Louis University’s School of Medicine (USA) in 2008. He was an Assistant Professor at Daegu Haany University from 2008 to 2011 and joined KNU in 2011. His research interests focus on the development of candidate drugs for the treatment of sepsis. A respected and senior researcher, he is currently working on the development of such drug molecules and early detection kits for sepsis. He has published over 270 peer-reviewed SCI papers (including more than 220 SCI papers as the corresponding author).